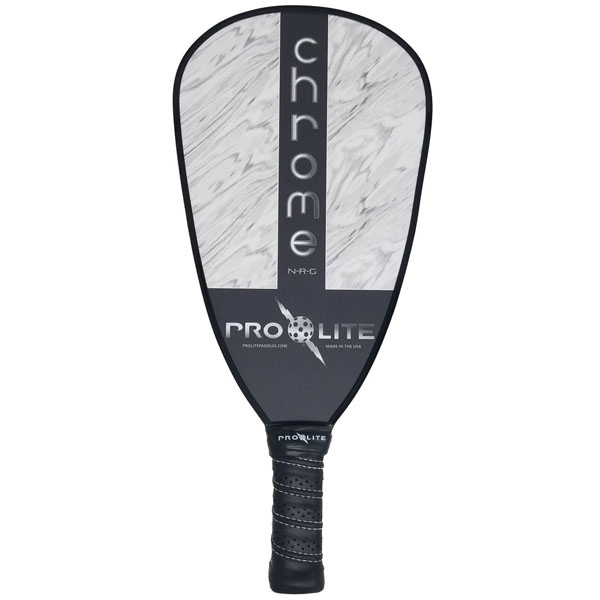 You don’t need to see your reflection to see yourself winning. “Chrome N-R-G” shines on the court - and on the podium. Chrome breeds confidence backed by conviction. Engineered to perform, it’s a take no prisoner’s player.

No fuss – just results - like the players who swing them. No other manufacturer has truly taken steps to veer off the path and produce a paddle with innovative performance characteristics like this one. Much of what you see on the market today is similar to one another. Chrome is the differentiator, a dominant force poised to heighten your game regardless of skill level - using every bit of permitted dimension allowed by the USAPA for sanctioned tournament play.

Unorthodox - even radical – it’s a beautiful beast. We built Chrome to be a well-rounded player but it sets the standard no matter your style.

For you power hitters or single’s players, its QuadCore™ polymer honeycomb core delivers the smackdown like no other. Chrome’s elongated, tear drop shape is perfectly suited to carry its omnipotent, forgiving sweet spot in the largest area of the paddle. No other “long” paddle on the market has engineered the elongated shape to enhance the sweet spot – until now.

On those base line ground strokes, its loaded, head-weight momentum demands that the ball come off the paddle harder and faster – that is, until you slow things down.

During those dink rally’s and inside out shots, soft game players will appreciate the featherlike control that comes from the gel-coated, triple-layer fiberglass paddle face. The ball stays on the paddle just a touch longer during soft play for disciplined, purposeful placement. Oh yeah, we’ve covered the bases with this one.